As follow up to a November 2010 camera launch, a group of  11 students, professors and community members gathered on Saturday, March 5th for the second installment of Grassroots Newark. The dual purpose of the project is to (1) document the progress of the development of the riverfront park being built along Raymond Boulevard in Newark, NJ and (2) use the site space to teach people about grassroots mapping while testing new processes by innovating balloon, kite and camera designs.

The group constructed a three-mylar sack balloon with an arch and long tail - modeled after a design used for Gowanus Canal in January. While the sun was out and we had a beautiful day, the wind speeds were too high for a successful launch. Simultaneously, a couple people in the group attempted to fly a kite, but were unable to get it to stay level and high enough for an extended period of time. 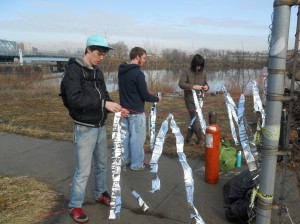 Thus, we only accomplished one of the two set goals and ended up having a great time outdoors with our way-too-powerful balloon. Additionally, we saved the tail the Eugene Lang students (above) made and will use it again.

For next steps, we plan to meet again on April 16th with a new design that can maintain its shape without ripping the mylar while withstanding higher wind speeds. Other learning points to took away, were to (1) start much earlier in the morning when wind speeds are lower, (2) try to have the entire balloon constructed before working in the field, and (3) find additional tasks to keep all volunteers busy throughout the duration of the site work.

509 notes
created by liz over 4 years ago