A quick update: On Tuesday, Jeff and I took apart the new camera (i'll get the actual name of the...

A quick update: On Tuesday, Jeff and I took apart the new camera (i'll get the actual name of the camera posted next time) to remove the "hot mirror" filter, on the premise that it is blocking the UV. After some careful dis-assembly (I'll post pictures next time) we remove the filter, and resealed the camera, which still worked. To test the capabilities, we aimed the camera at a UV pass/visible block filter, with the black LED light behind it. Tot he naked eye, the filter was black. To the camera, you could easily see the LED's through the filter. I found that the camera is able to take dim photos surroundings, relying on only the ambient UV light, such as seen with the picture of the screw driver above, taken through the UV pass/visible block filter. This is a big step in being able to detect oil pollution, as UV is not transparent to the UV spectrum, and when looking at UV spectra transmitted through oil samples, there should be adsorption lines. To test this, I set up a transmission spectrogram, withe LED black light as the light source, and the sample being either water, air, or glycerin. This is where I hit the problem I was expecting: all the spectra looked essentially the same, as seen here, a spectrum of black LED light through mineral oil 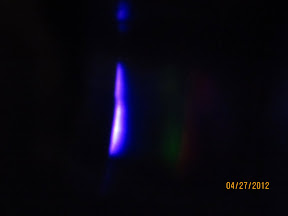 There is only one band, and a somewhat broad one, presumably the 380 or 405 peak common to black LED lights. To get a useful adsorption comparison for oil detection, I will need more full spectrum light, which I think can be provided by a tungsten halogen lamp, filtered by a UV pass/visible block, although I will have to do more research.

633 notes
created by warren about 8 years ago

35 notes
created by warren about 8 years ago