Since the last time I posted, I've been trying to work out how to photograph UV spectrum, which i... Since the last time I posted, I've been trying to work out how to photograph UV spectrum, which is difficult because relative to visible light spectrum they are to faint- at least this was my theory. I literally just thought to check the transmittance spectrum of polycarbonate, which is what the CD diffraction grating is made of, and it turns out the it blocks UV light to a high degree. So that explains why my spectra never showed any significant intensity below 400 nm. Well, never the less I was able to finally photograph a UV spectrum, seen above. I guess I just got lucky- my original thought process was that using a larger slit will increase the brightness of the spectrum, making it easier to photograph. But by increasing the slit size, the spectrum spreads out, so you need a larger diffraction grating. I've had a couple sheet, about the size of notebook paper of linear diffraction grating that I never had need for before, because I wanted to try to do everything with low tech items. In any case, I built this new spectrometer: 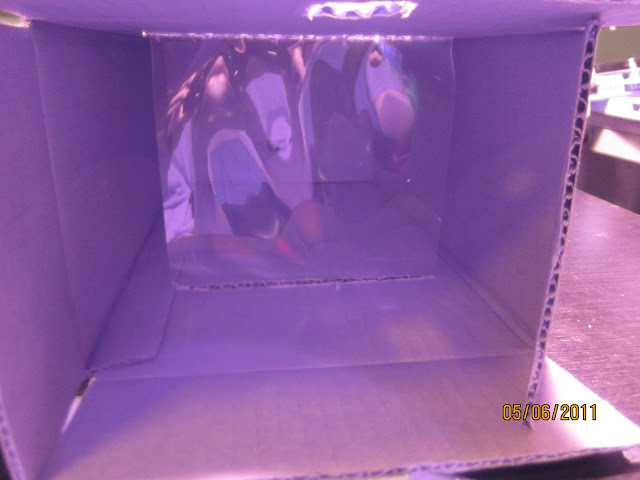 which is just a box with the huge diffraction grating down the middle, and a slit at one end, and a hole for the camera at the other. I took some photos with it of halogen lamp spectrum, which actauly turned out better than my previous attempts, because the light didn't glare of the sides to bad, as the sides were farther from the path of the light. Then I put the UV pass/visible block filter on the slit, and did some extra light pollution proofing, as viewed with he UV camera, the apparently dark box with completely lit up by the UV light. And I finally got a UV spectrum! It is still pretty faint, and low resolution, but I uploaded it to spectrometer.publiclaboratoryanyways

So, basically it was just luck that the diffraction grating I switched to is made from a different plastic that doesn't adsorb all of the UV light, although i'm guessing it does adsorb some of it. Reflective spectrum would solve this problem, I think. I will experiment with using some foil left over from CD labels for gratings, as they also diffract light.

Also, I will have to see what the transmission spectra of the sample containers I am using are- that could be a big factor as well.