Finally getting around to testing @mathew 's clever ideas around sealing up plastic water bottles... Finally getting around to testing @mathew 's clever ideas around sealing up plastic water bottles as electronics enclosures!

The basic idea is to leverage the technologies already perfected by the 'home brewing' community (and by chemists ...), and use a mechanical, gasket-like seal between a rubber stopper and the edge of the water bottle mouth. Mathew discovered that a 'number 2' stopper seems to fit inside a typical (20 mm diam) water bottle mouth.

The other advantage of this approach is that it gets around using adhesives directly on the plastic of the water bottle; water bottles are typically made from polyethylene, which is hard for most stuff to stick to very well (a nice feature for a drinking container): instead, we can use adhesives inside a hole drilled inside the rubber stopper itself (or on other materials we might use in further gasket configurations inside the stopper, like tubing.

I was in a rush last week to attempt this idea, so I simply took the adhesives available on my desk, took some wires -- and then, at the very last minute, a temperature probe -- and tried sealing them nicely inside the rubber stoppers. I let them cure over the Labor Day weekend, with the idea of deploying them asap. 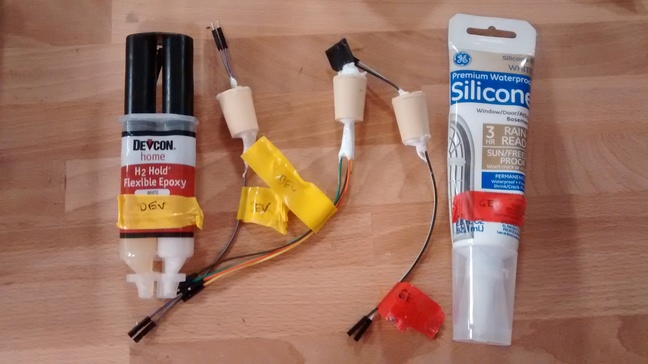 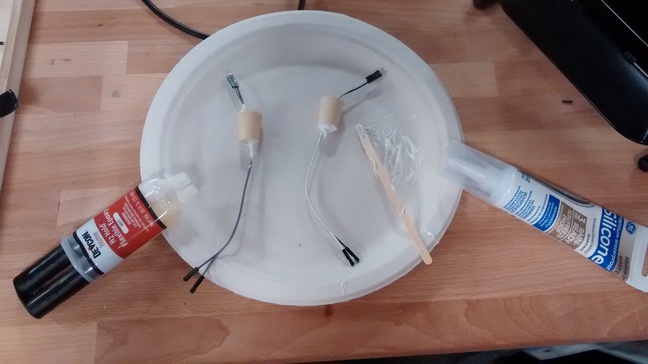 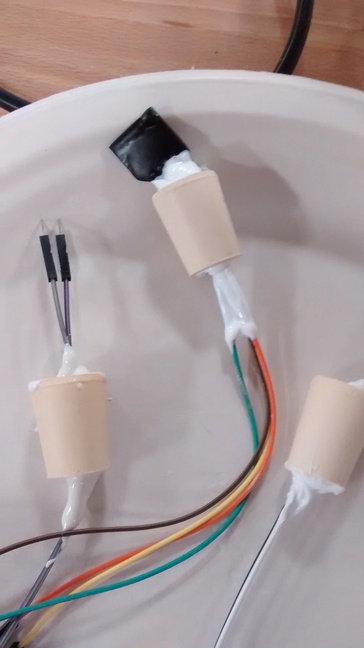 I also ordered some dessicant, available on Amazon for about fifty cents each, which purportedly changes color when it absorbs moisture ... 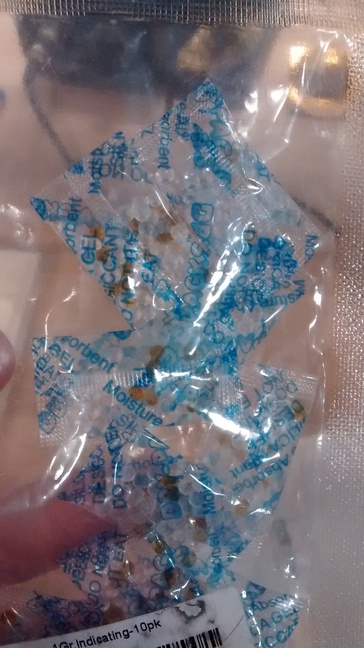 I'll be trying these out in water bottles today sometime -- will post pics of the configuration ...

this is interesting! I hadn't thought to just use the stopper directly filled with silicone. what if you got a solid silicone stopper and put two small needle sized holes in it (carefully) and ran each round wire through its own hole. you'd probably want to put some glycol on the wire jacketing to make things easier while assembling.

This looks like a surefire way to waterproof the wires. But now you have to waterproof the seal between the stopper and the bottle. Plastic water bottles are not designed to work with stoppers and typically there will be only one narrow (circular) point of contact between them. Knocking the stopper could dislodge it. A stopper could work well if there was something to hold it in tightly. With a submerged collapsible plastic water bottle, water pressure will exert pressure to expel the stopper (I think, and with a rigid bottle, water pressure would hold the stopper in?).

Is there a way to leverage the threads on the water bottle cap? These seem to seal tightly in normal use, and the gasket could be enhanced. But then it's still hard to waterproof the wires. I'm still not convinced that there are any sound arguments to use a plastic water bottle for this purpose. There must be many better solutions.

@DavidMack a silicone stopper would be great! they're better in cold temperatures than natural rubber. It also seems like it would bond better with a silicone glue, though I'm not sure. The stopper will be of a catalyst silicone, while the caulk is a different polymer in a solvent of some sort.

@cfastie Slippage is not an issue with the cap on, and if a #3 stopper is used. As for the bottle being a good housing, PET is tough, and a tough material to bond to, so it fouls slowly in water. Same for the HDPE of the cap. My biggest worry would be the cap getting cold and shattering. Rice resists compression, reduces boyancy, and provides an both an ample desiccant and some thermal mass to protect the electronics against rapid temperature change: The alternative would be building a custom housing that will never be particularly cheap in the runs any of us are going to do. If I were going to do it, I'd probably do something similar to the awesome work that Edward Mallon is doing. Those things could probably go through a boat propeller and keep logging. These are hardened data capsules that could go years.

But they aren't without their drawbacks.

none of the parts can be made with the exacting equipment needed for low surface energy materials like PET and PE, unless you are milling them from blocks. Most of the parts in small production run will be more easily bonded materials like metals, PVC, acrylic, nylon. Edward is encountering the fouling trouble inherent in these material choices. I need a Rfle to stick in a bottle! I'll eat my words if it comes out with barnacles in a few months.

The configuration with the stopper held in firmly with the threaded bottle cap looks really good. How hard is it to get that to work, i.e., to get the stopper to slide in just the right amount so the cap can thread on and hold it firmly? Maybe some grease could be used under the cap for an extra layer of waterproofing.

the #3 stopper just barely fits under a bottle cap. I'd mentioned trying vulcanized rubber stoppers and that they were too hard-- the problem was pushing the stopper in far enough for the cap's threads to hold.

Grease might help. With the softer natural rubber, its easy to push it in far enough for the threads to take a bit, and screwing the cap down firmly sets it in place. turning the cap gets difficult because of the stickiness of the rubber, and some grease may let the cap turn smoothly. If the stopper is too greased up I'd worry it would be susceptible to being pushed into the bottle.

Now, all the tests I did involved fitting a tube into the stopper's hole. The elasticity of the stopper will change if its pure caulk in the middle. We'll see how that works. If the caulk bonds well to both the wires and the stopper (and i expect it could) I think the idea has some real traction. if we're having bonding trouble, putting something rigid back in for the caulk to hold on to ought to work. They sell for about a buck each, and give you a cone washer and a pass through hole in the same contiguous piece. They come in several sizes, and if you were really lucky, you might even be able to find a bottle size where the threaded pressure ring was close enough to grab on the threads of your bottle. But if not it would be pretty easy to simply drill the right diameter hole in the bottles cap, and use that as the pressure ring. I tap the inside and then fill the pass-through with epoxy after sealing around the cables with heat shrink tubing.

So far these have survived more than 8 months down around 10m depth.

Cool! I ordered some of those PEX connectors to try out!

We've been discussing a variety of connectors. check out these recent developments: https://publiclab.org/notes/cfastie/03-11-2016/nalgene-submarine

came out of discussion and search here: https://publiclab.org/notes/mathew/02-10-2016/riffle-conductivity-caps-and-other-housing-ideas

We've also been playing with these purpose-built aluminum ones by blue robotics. they're 4 bucks: https://www.bluerobotics.com/product-category/parts/connectors/

421 notes
created by warren over 7 years ago

109 notes
created by donblair over 7 years ago

7 notes
created by stevie over 5 years ago