What I want to do This is my entry into the oil testing beta program--the sampling! I also want... eustatic was awarded the Basic Barnstar by warren for their work in this research note.

This is my entry into the oil testing beta program--the sampling! I also want to include the Grand Isle coffee that Team Orca (RIP? undead?) collected in 2013. The GRN continues to hold Tarball samples taken from Louisiana and Mississippi Islands from 2010 to 2015. Matej has expressed an interest, so now I have to figure out how to mail such things.

The third iteration of the spectrometer really does resolve so many of the variables that made the initial spectroscopy of Grand Isle coffee so difficult for me. Kudos to the Spectral Workbench team for:

I was easily able to integrate my previous samples, kept in a cooler at room temp for a couple years, into the Beta testing system. Team Orca had an array of equipment for sampling and keeping tar balls in the field, which include:

some of which is pictured here: 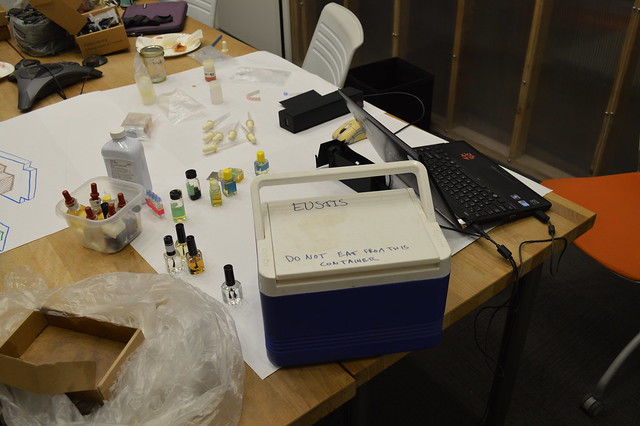 I was used one of Stevie's Favorite Spectrometers, version 3.0. this worked well, although there were occasionally some echoes in some of the fluoresence signals into the 860+ nm wavelengths.

We followed the instructions on the oil testing beta page, which the exclusion of smoothing the curves. I may try a second iteration of these data with curve smoothing.

After mastering the one-glove-laser-and-cover technique (here demonstrated by DD), I was up and running in no time.

The intuitive smell test remains a critical component of Team Orca's repetoire As a field test, it's hard to beat. The nose knows--even one as terrible as mine, which has been numbed with a march of sinus infection problems that renders my smell and taste senses rather insensitive. 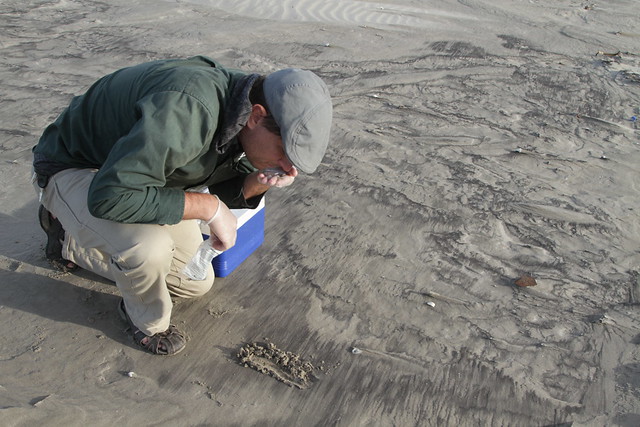 The cross-handed motion of running the laser while typing on the computer was a complicated motion. DD and DFlores both discussed the fact that oil spill testing was easier with two people--one to hit the laser, and one to type and click "save." It's also kind of gross; inevitably, oil goop gets on your keyboard. 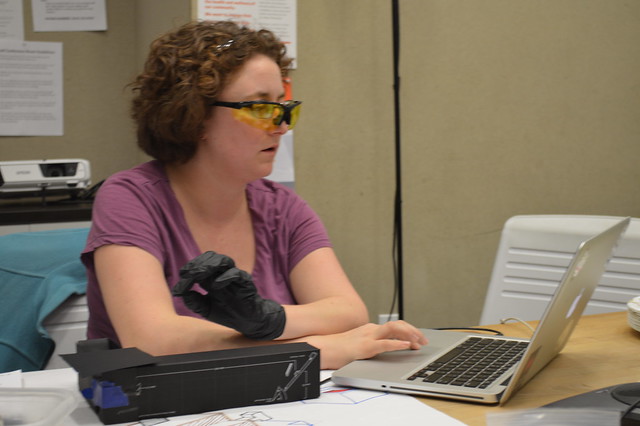 The black cover over the vial / cuvette was helpful for reducing noise in the spectra, but also necessitated a complicated hand position. 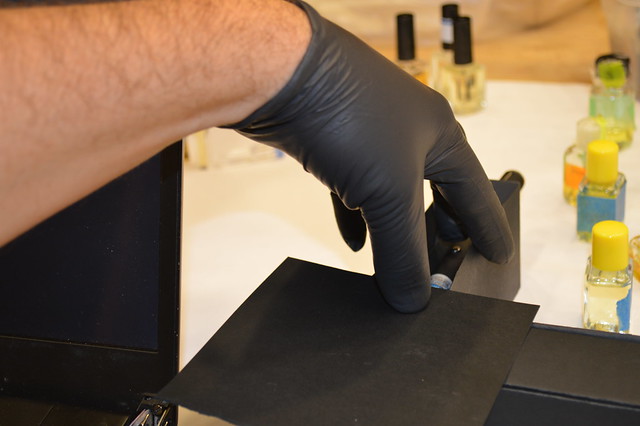 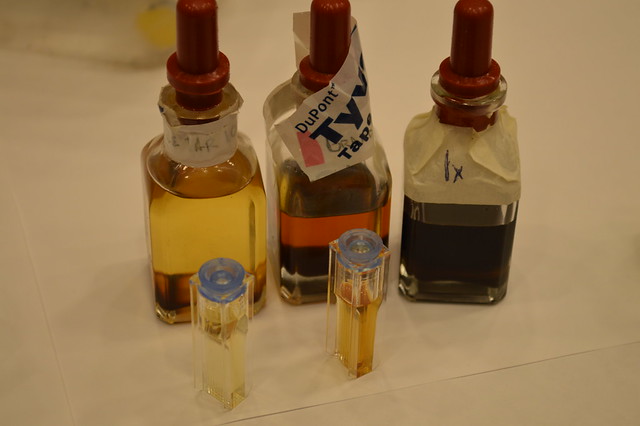 Here you can visually compare the different opacities of different samples: 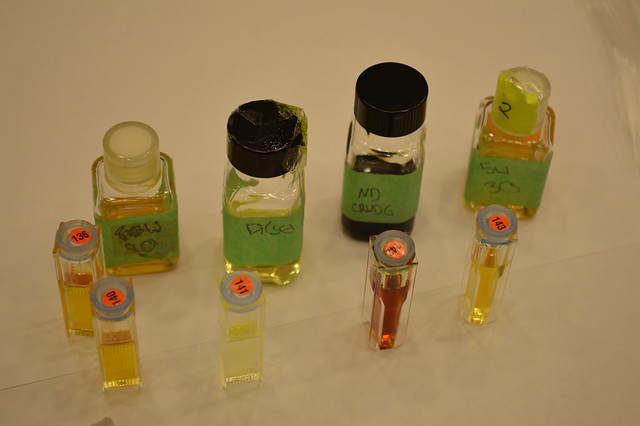 And here you can see the differences opacity of the different dilutions of Grand Isle Coffee. Not sure how to measure this with the spectrometer, although Ethan said we could.

Team Orca has over 30 jars of tar from 2010 to 2015. Do the spectra from what are presumably all Macondo tar balls appear different over time? Can we assume these are all Light Sweet Louisiana crude, or all from the same source?

Ed Overton at LSU studied tar balls in Louisiana and discovered 66 sources from less than 120 samples, based on Gas Chromatography / Mass Spectrometry. Could the spec distinguish "light and tight" Bakken crude Heavy Venezuelan tar or from "Light Sweet" Louisiana crude? Doing so would help distinguish tar balls from production spills vs transport spills.

What do I do with all these tar balls GRN has accumulated over 5 years? Would it be practical to develop a mycelial oil remediation kit to go along with the oil test kit, a la the Formaldehyde sensor kit?

Team Orca lives.. We will continue to experience tar balls washing up in Louisiana, Mississippi, and Louisiana. I will post my field kit and NRC procedures in later notes.

liz commented about 7 years ago

Fantastic and entertaining write-up @eustatic -- thanks all!

Scott, I'd be really interested if you collected a set of a bunch of different tar ball spectra, esp. in different states of decay/weathering, to see how consistent they are. For example, multiple scans of the same sample at the same dilution, as you've done above, look pretty consistent. Is it possible to just collect a whole bunch of tar ball scans you've already done and add them to a single set?

Thanks, Scott, this is great!

I owe Matej samples. Stevie gave me some brown jars, so i can divide the bulk samples and mail them to him. then, we can zap them independently!

635 notes
created by eustatic about 7 years ago

128 notes
created by eustatic about 7 years ago

184 notes
created by warren about 7 years ago