What I want to do I would like to describe some problems encountered in Southern Louisiana where... I would like to describe some problems encountered in Southern Louisiana where having a visual Oil Testing Kit would be useful. Southern Louisiana is one of the 'sacrifice zones' for the oil industry on the planet. There are many places in Southern Louisiana where chronic oiling occurs, but the hazard has been determined a political problem, rather than an environmental problem. People living in such locations, by definition, lack political power to resolve the environmental problem. The personal testimony of oil hazards is often discounted. Oil and oil residue is often detectable by odor, but documenting odors relies on personal testimony.
Public Lab tools, specifically the oil testing kit, could be deployed to bolster community claims of oiling, and provide a new look into what are considered old problems and old news.

The town of Oakville, Louisiana is a half-hour outside of New Orleans in Plaquemines Parish. It is situated on the west bank of the Mississippi River, and was planned and populated in the era of Reconstruction. An industrial landfill has haunted Oakville's horizon since 1985, and remains an environmental hazard despite lack of official permits, court decisions, and political promises to close the site. The landfill is susceptible to coastal flooding that can disperse contaminants throughout the area.
While the focus has been on the immediate hazards of air pollution from landfill fires and reduction of waterlogged drywall into hydrogen sulfide gas, there is also oil sheen pollution on the waters of the Oakville ditch. 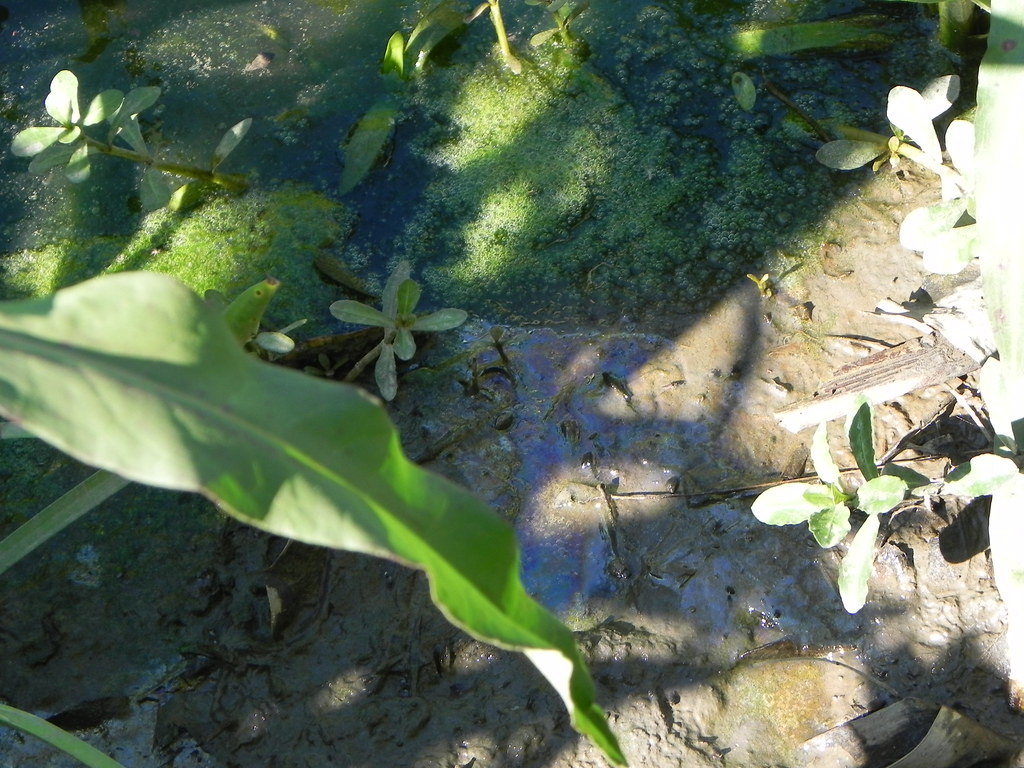 As the water in the ditch is shallow and highly turbid, water sampling often retrieves sediment, which has previously contaminated water sampling in the past. 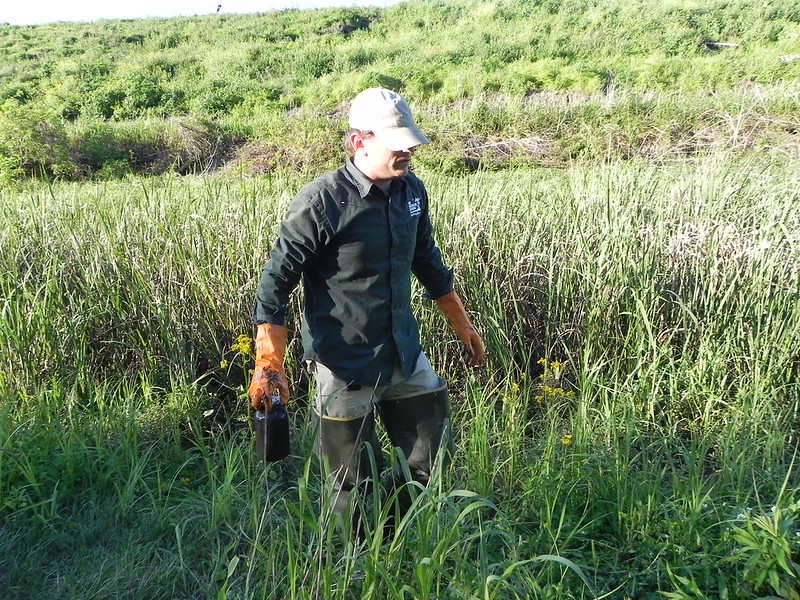 The techniques for water sampling developed by the oil testing program are relevant to this situation, where water samples free from sediment are desired.

Water samples taken previously tested as heavily contaminated with oil and radioactive material associated with drilling waste[reference needed from CVD Pace results]. This was expected, as the recycling of "Industrial Pipe" involves washing crude oil and exploration wastes from used drilling pipe with water, which then is stored on the unlined landfill.

Although sheen is seen on the waters of the ditch, a likely argument from the opposing side will be that the oil is from local consumer sources, rather than leachate from exploration wastes running off the landfill site. Should the oil testing kit be able to discern crude oil from local, refined, consumer sources, it would assist community advocates in arguments against expanding the landfill, and arguments for more advanced testing of oil pollution on site.

Oil may also be found outside of the site, since the ditch is pumped into nearby wetland forests. Investigation into the pump outfall may reveal matching oil off site.

Grand Isle, Louisiana, two hours from New Orleans, is one of Louisiana's few beaches accessible by automobile, and so is marketed as a tourist destination. However, like many Louisiana beaches, the shore is littered with tar from thousands of oil spills. In addition to carcenogenic compounds, tar balls are known to harbor Vibrio, a human pathogen.

Sources of such tar include exploration and production in the inshore and offshore Gulf fields, but also the transportation of both refined and crude product. Testing less than 130 samples of tar on Louisiana Beaches by Overton et al from LSU for MMS revealed over 66 sources of tar, mostly from transportation sources. If such a situation is a baseline, how can we estimate the impact of BP's tar? Would we be able to detect an increase in tar from exploration and production, rather than transportation sources?

Tar Balls can be characterized by color, texture, sediment content, and a number of rough qualitative measures. In Alabama, Tar Balls of certain physical characteristics have been shown to be exclusively from BP's Deepwater Horizon disaster. How will spectra of Alabama tar balls be compared with spectra of tar from Louisiana, where we expect background oiling from Taylor and other wells to contribute to tar on beaches? 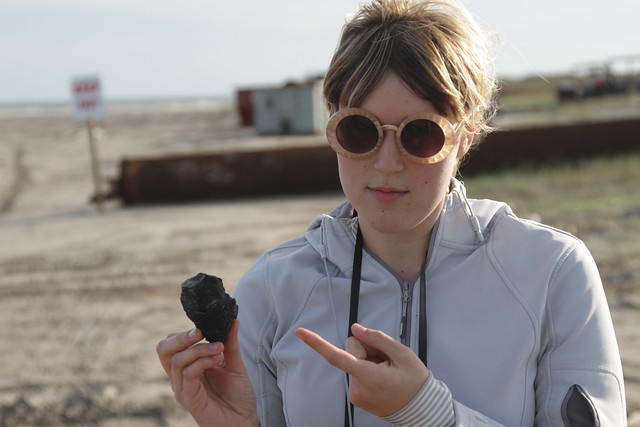 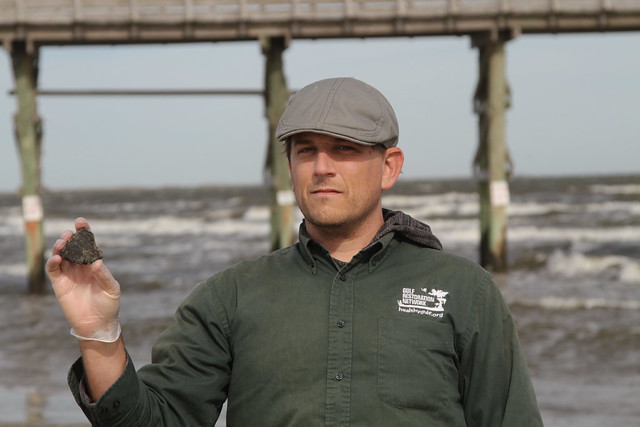 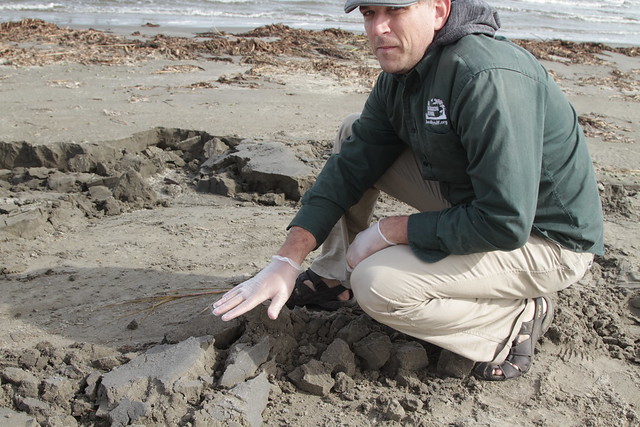 Tar on Grand Isle (grey, sandy)
Central Questions: Is the tar from crude or refined sources? How will Alabama tar balls compare to those from Louisiana? Can the oil testing discriminate between Macondo tar and tar from other spills?

In the Florida Parishes of Louisiana, there is investment and movement to frack portions of the Tuscaloosa Marine Shale above the (sole-source) Southern Hills Aquifer. Community members concerned with the new movement to drill want to investigate drilling pits remaining from decades-old drilling efforts. If contamination is found, it would highlight the long term consequences of present or future drilling by revealing the extent of remnant contamination of closed drilling pits.

Old drilling pits about 90 minutes from New Orleans are used recreationally as ATV courses in Tangipahoa Parish. Although the pits were inspected by DNR and approved for closure, there are questions about DNR's process, and whether the ATC activity unearths any buried contaminants. 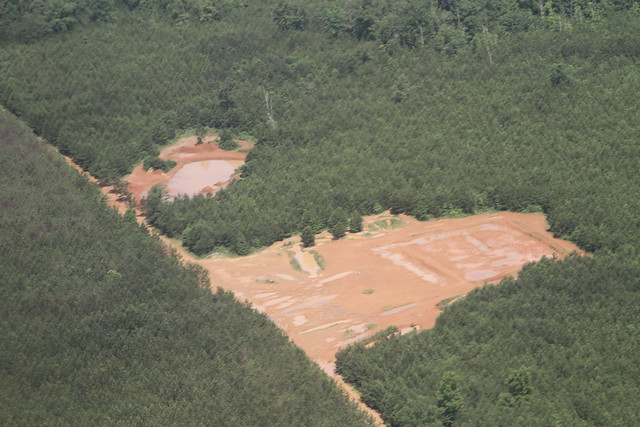 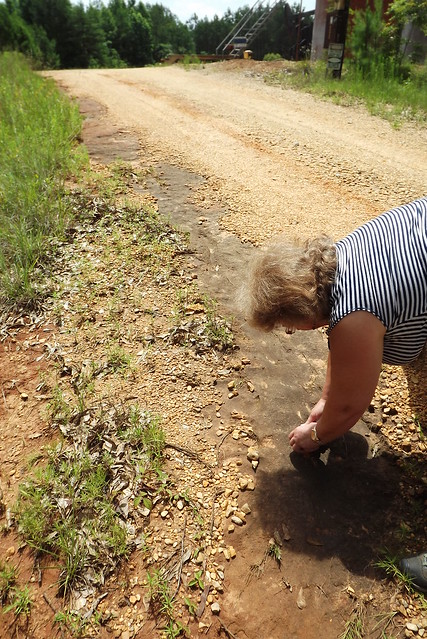 Central Questions: Is there oil on these sites? Can the oil testing discriminate between consumer oil and remnant exploration wastes?

gretchengehrke commented about 6 years ago

Fabulous post, Scott. Thanks! For each of these situations, would the process be to try to convince Louisiana DEQ that there is oil and that the oil is not from consumer use/automobiles, and then DEQ would make the company clean up their act? For the landfill, if they are already operating without a permit, would there be anything to make them accountable? On Grand Isle, would discerning crude from refined oil be enough to warrant a response from the oil companies, or at least from DEQ to do further testing to try to identify a source?

Ha. These questions are painful.

Love this. Thanks Scott!

One thing I'm thinking is that if there's one more expensive lab test done to determine that one sample is crude and not consumer oil, and we take a scan of that with the oil testing kit, we could leverage that original test by testing lots more samples with the OTK. Is there a specific case you can think of where a sample has been tested traditionally and we could try that methodology?

Also, wanted to check that you're in touch with @annchen about use cases and narratives as she's working on that! Thanks again!

Yeah, Ann put the fire of deadline to me.

well, no. i've never had a test done to determine this question of crude vs refined. i just thought that it is, possibly, a binary that the OTK could discriminate between, and that kind of info is a bit useful. there's some literature on mass spec / different components in crude vs refined, so that i'm sure a test could be developed by looking for those components. perhaps it's already in my reference post.

Yes! annchen is someone else, i guess. I didn't use @ so whoever that is doesn't get another email :-)

Hi, Scott - we're using some of the photos you posted here in our report, but I was curious if you'd release the linked-to albums under CC-BY or CC-BY-SA as well? There are some great ones in there!

Photo rules at GRN are a bit sensitive just now.

I can give you permission to use them with attribution ("by Gulf Restoration Network") immediately, but it's going to take a bit of process to go to CC-BY-SA. Is this a formal requirement of Public Lab pubs? when is your deadline?

Oh, it doesn't have to be CC-BY-SA -- it could be CC-BY; your permission here wouldn't be CC-licensing but just a one-off to us, right? The only reason we ask for CC-BY or CC-BY-SA is so that anyone can reuse our final document with all its images without having themselves to ask for permission. We can also keep things simple and just use images that've been published CC-BY or BY-SA and you don't have to worry about it. Thanks, Scott!

632 notes
created by eustatic about 6 years ago

35 notes
created by eustatic about 6 years ago