I built 3 sensors around the Shinyei that log data on an SD card. I also 3D printed some enclosures. A picture of a finished box (lid not shown) is below. I tested the sensors pretty extensively indoors to ensure that the program and electronics were running well. I did not find any issues. I've been working closely with the Rhode Island Department of Environmental Management's to understand their air quality monitoring network and identify potential gaps. On Friday 8/3, I had the opportunity to collocate 2 (the third was not ready) of my sensors with a Federal Equivalent Method (FEM) sensor at their "near-road" site along Interstate 95 on Hayes and Park Street in Providence, RI. The FEM collects mass concentrations on an hourly basis using a filter and weigh technique. This is in contrast to the optical particle count to mass approximation technique used in low cost sensors such as the Dustduino, Dylos, Speck and Purple Air. These sites often look like a small trailer from the outside. Some images of the inside are below. 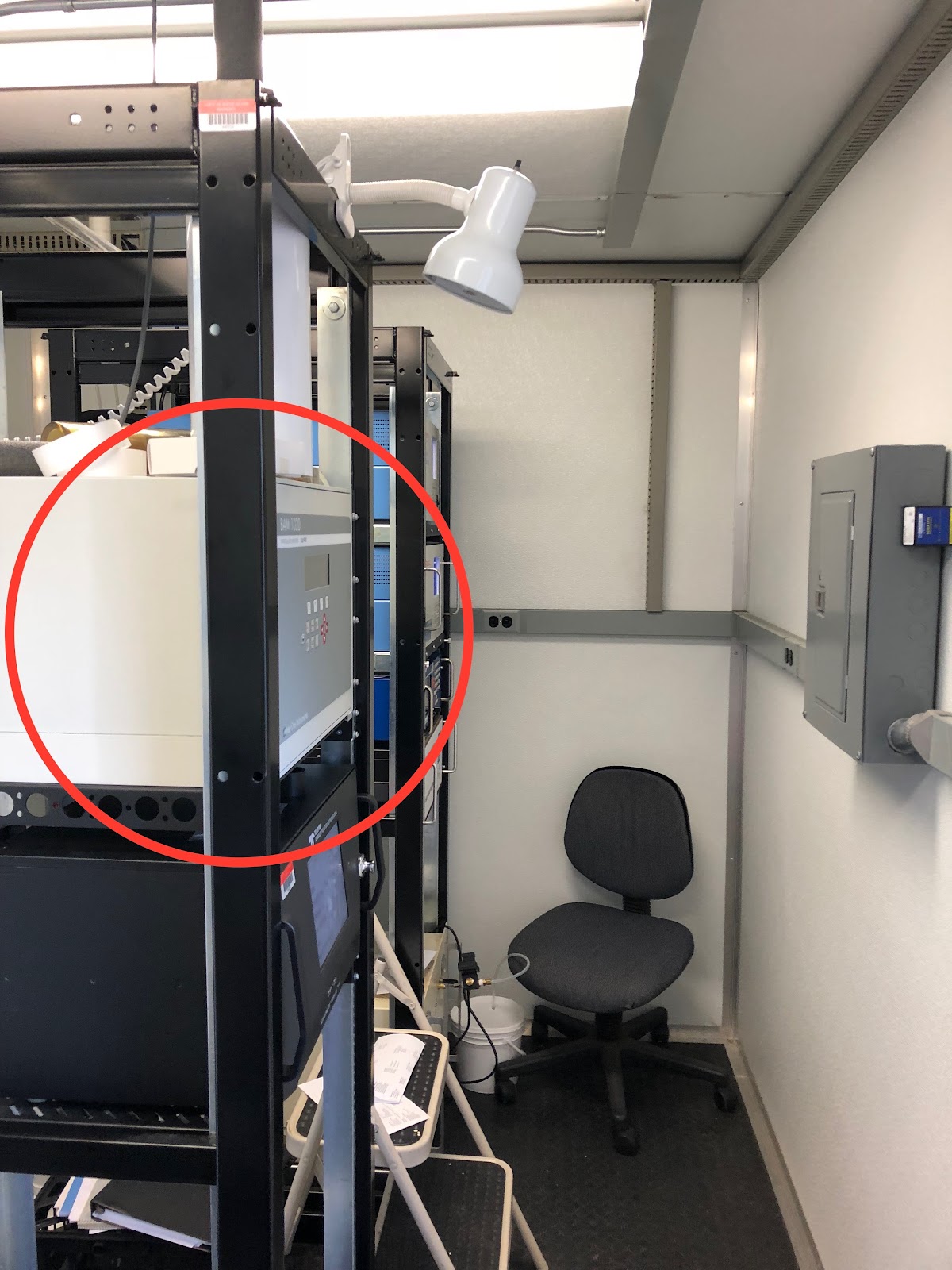 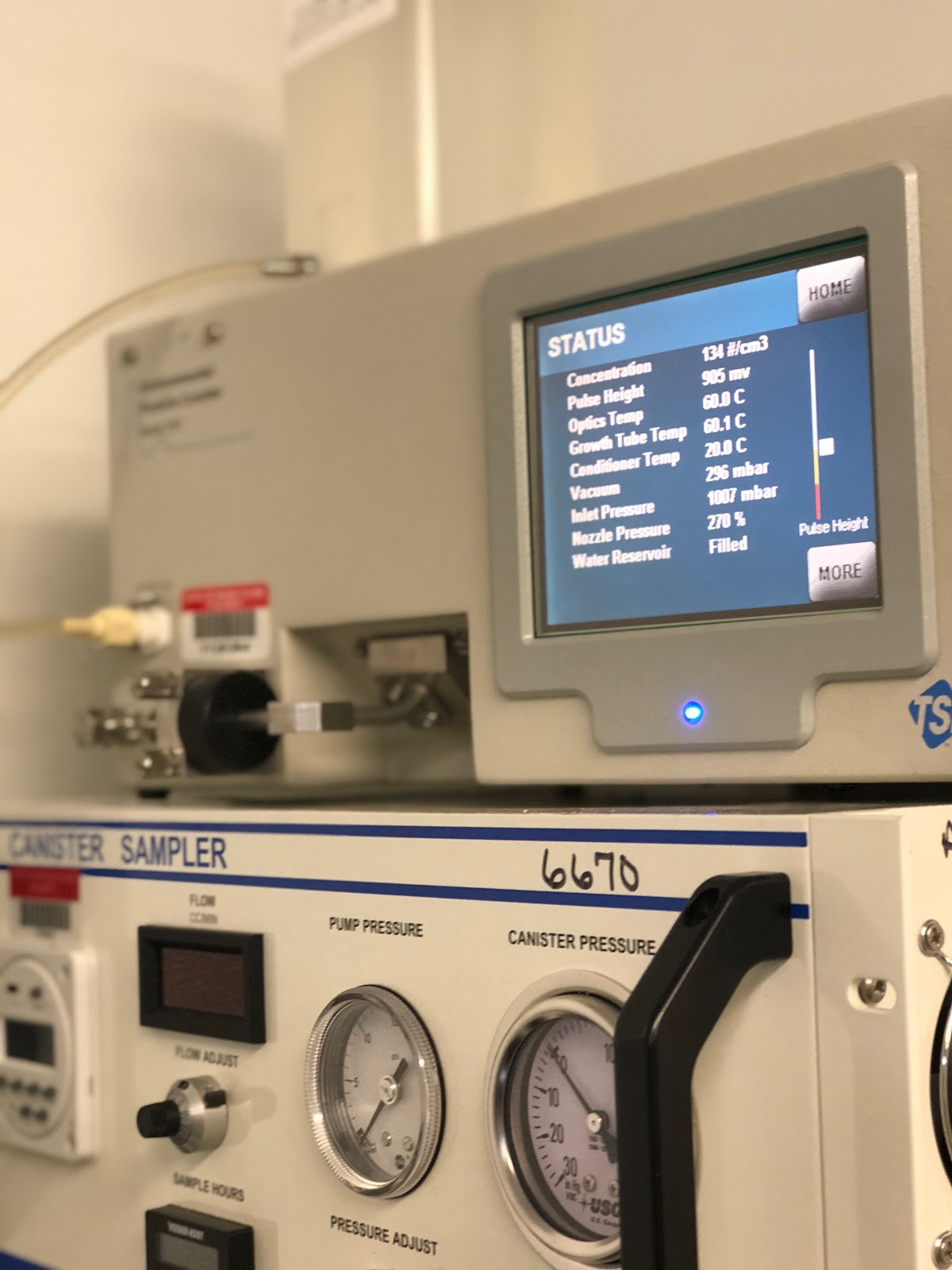 The circled machine in the picture on the left is the FEM sensor that uses a beta attenuation monitoring (BAM) method.

The machine in the picture on the right is an ultrafine particle counter. It uses condensation to enlarge the particles such that they may be measured optically.

The two sensors were placed on the roof of the trailer and just duct-taped to the grated roof for some security. Photos of the sensor on top of the trailer can be seen below. 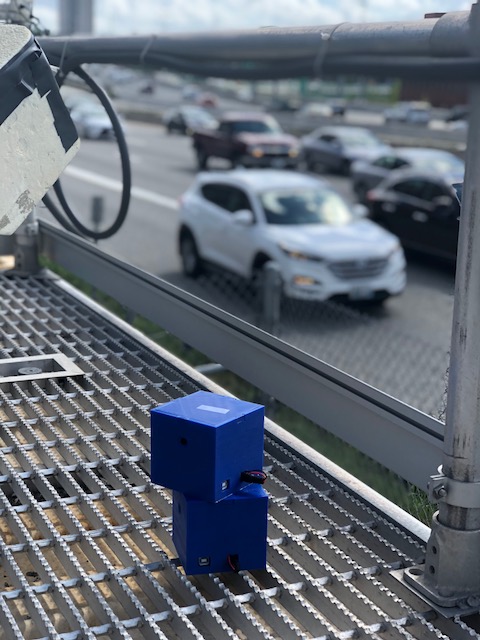 On my first collocation attempt, there was a rainstorm within 24 hours. Coordinating with the DEM availability was challenging and I was not able to return to the site until 8/16. By then, as I had feared, there was a small pool of water within the enclosure and the arduino had rusted a bit. When I checked the electronics that day, they were not working and i was unable to read the SD cards on my computer. A few days later, the electronics are functioning but I am only able to read one of the SD cards. And that data file was tampered with as well. So I have no data from the Dustduino but on 8/16 I setup the 3rd sensor that hadn't had any water damage by itself and will pick it up later this week.

Some reflections from this experience: @jiteovien So cool to see that large testing equipment next to your little Dustduino! Anyway, your need for a waterproof set-up reminded me of work done by Shannon Hicks for the Mayfly Board at Stroud. You can check out the case she uses here https://www.envirodiy.org/mayfly/. I know with a setup she helped me with we had to drill a hole and use a connector with bladder to allow for the sensor we were using, but things remained waterproof. She also uses a special paste to prevent corrosion on solder joints. Sorry I don't know what the paste is called!

442 notes
created by jiteovien over 4 years ago

83 notes
created by liz over 3 years ago

1 notes
created by liz over 3 years ago