What I want to do Photo emulsion print a more accurate collimation slit based on ideas from Jeff... Photo emulsion print a more accurate collimation slit based on ideas from Jeff and Dave Stoft. Photoprinting was done by Camera Graphics in Portland, depositing silver halides on an acetate sheet. since the deposition layer is extremely thin, it would constitute a superior slit to a cut material. By being slightly reflective, acetate will also help minimize chromatic aberations and internal reflections. 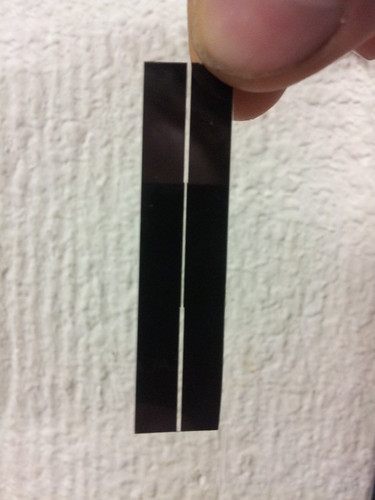 Jeff had also mentioned that he thought a stepped slit, with a wider and thinner section, might help to control exposure by providing an over and under exposed area of spectra. I could not find any evidence for this occurring during my tests.

The phone used was a Samsung Galaxy SII

I printed a variety of slits in .03mm increments, each one with a wide section twice the width of the slit. Above .12mm there was a lot of blur to the spectral lines, and the finer slits provided cleaner spectra.

I also did some distance tests. the .03mm slit could only pick up the faintest blue line in a fluorescent spectra from ~2 meters, while the .06mm slit was good to 5 meters. The .09mm spectra was good beyond 6 meters, but i didn't take it outside to test its farthest accuracy.

In the balance between accurate spectra and light sensitivity, the .09mm slit seems to be the best. Its spectral peaks were just as pointy and clear as at .03mm but it produced brighter spectra, without the cutoff and internal reflections that began to be an issue at .12mm.

The stepped slit concept appears promising, but I believe the two widths of slit would need to be closer to eachother to become useful in the spectrometer. I'd like to try the same approach with something closer to a checker pattern. For now, I'm going to setup the backpack spectrometers at .09mm.

BTW, your links to Dave and I should be to /profile/foo, not /users/foo -- just a side note.

The slits are amazing... so precise! And the smartphone cameras are so much better than the ones we're usually using... quite remarkable.

Yes, the photoprinting gets excellent results. I'm consistently impressed by it, and the lack of internal reflection and aberrations that appear. Its a huge step up. I'm going to post a response and some further spectra at your follow-up research note: http://publiclab.org/notes/warren/09-25-2013/stepped-slit-tests

Super. I hope we can get the stepping to work, though most of all for the desktop kits -- imagine not doing any more lasercutting! And while some phone cameras seem to avoid too much clipping, the webcams are def. not as good at it. If you have a chance to do daylight and CFL spectra with the stepped slit, that'd be great to see!

627 notes
created by mathew over 7 years ago

12 notes
created by warren over 7 years ago