Our analysis of deindustrialization in Rhode Island looked at how manufacturing activities have l...

Our analysis of deindustrialization in Rhode Island looked at how manufacturing activities have largely disappeared -- an uneven geographic process spanning nearly 60 years. The analysis presented here looks at the other side of the process: the accumulation of industrialized land and lingering environmental risks that are a legacy of the state's long industrial history.

We use the term "relic industrial site" to refer to parcels of land that we know were once occupied by one or more factories where industrial activities of some sort took place, but no longer do. The industrial activities vary a lot, from baking and chemical production to printing and textile manufacture. Our data identify twenty different types of manufacturing, although much of it related to textile and jewelry industries. The size of the operations varied a lot too. Large textile mills might have employed hundreds, while many were small family-run businesses with perhaps just a few full-time workers. In terms of environmental risk, some facilities would have generated more hazardous waste than others.

We don't have a lot of information about which of these relic sites are contaminated and which are not. We do know that such sites have accumulated steadily over the past six decades, even as deindustrialization was crippling the state's economic condition. We know that the process of relic site accumulation is ongoing, incrementally adding to the state's ledger of industrialized land, lot by lot and year after year. And, now, we know where to look.

We can watch relic industrial site accumulation unfold in the animated map below. Each orange dot represents a former industrial site. Their appearance on the map indicates the year the factory closed its doors. Our data begin in 1953 and run through 2016. In total, the map depicts 6,598 unique relic industrial sites that have spread across the state. 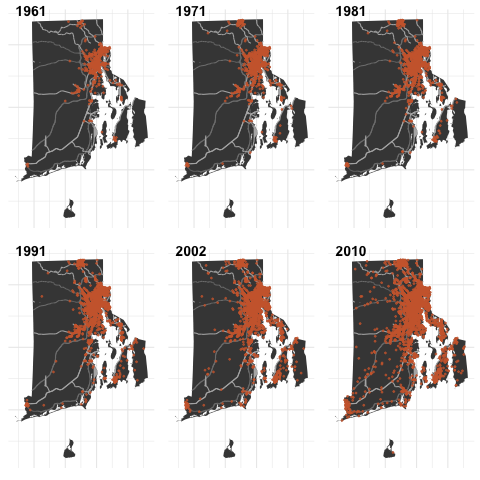 1159 notes
created by sfrickel about 3 years ago

7 notes
created by sfrickel about 3 years ago

2 notes
created by sfrickel about 3 years ago