At the Barnraising in Cocodrie a couple weeks ago, we had a hands-on session for spectrometer tes... At the Barnraising in Cocodrie a couple weeks ago, we had a hands-on session for spectrometer testing, and I brought some recent prototypes to try out. After the impressive tests by Stu in Australia last month, we were eager to try flame emission spectroscopy of soil samples, and Shannon and Liz brought some samples from New Orleans which would be likely to have some heavy metals in them. We ultimately didn't get to test those... but we did get some pretty good spectra of both sodium (prepared salt water, and marsh mud soaked in both water and vinegar) and sulfur (from matches). Above, Stewart Long and Dan Beavers and I burn things.

You can see some of the data here: https://spectralworkbench.org/spectra/search?q=lumcon

We tried using white vinegar to dissolve some copper from pennies, but it didn't seem to work -- granted, folks on the list had suggested stronger acids, but we just wanted to see if a more readily available, cheaper acid like vinegar would work. Some notes on vinegar which we jotted down:

Stu recommended evaporating a lot of the solvent (water) off to concentrate what we're able to soak out of the soil. Maybe we should try that... I'm going to look into where around Somerville MA I should collect likely lead- and arsenic- contaminated soil, since those are both issues around here. 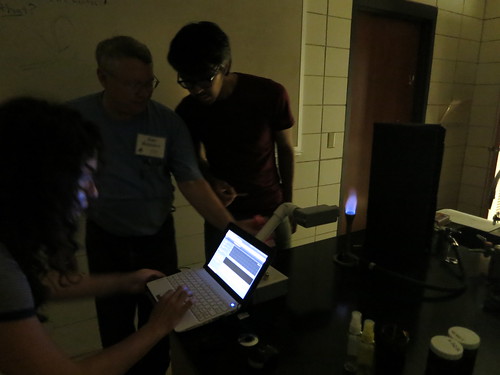 commented about 9 years ago

homechemist commented over 7 years ago

hcl is a strong acid but it won't work with cooper unless you add hydrogen peroxide, so i would recommend nitric acid for dissolve samples

632 notes
created by warren about 9 years ago

107 notes
created by warren about 9 years ago