Update, June 2014: This has now been implemented as part of MapKnitter, known as MapKnitter Sorte...

Update, June 2014: This has now been implemented as part of MapKnitter, known as MapKnitter Sorter. Please give it a try there.

I'm looking for some easy ways to sort blurry images from crisp ones (and good from bad) for a whole batch of images. My first thought was -- run a quick analysis on each image for blurriness, with a script. But for 2000-4000 images, that takes too long!!

OK, how about this: just look at the filesize! I already noticed that all-black or all-blurry images at the beginning and end of a flight are much smaller JPGs since less detailed photos will compress better. I tried graphing this to see if there's a pattern. My graph is here:

My other thought (also graphed) was to use the temperature of the camera, as stored in the EXIF tags -- an idea explored in an older post -- to see if we could calculate the altitude very roughly and trim out all images under a certain threshold -- say a hundred feet or lower. The above graph shows that maybe the temperature system is no good -- it just kept going up and up, and I think that's just because the camera is getting hot in the sun and from running continuously. Jessi even said "the camera's hot" when we took it down after the flight at UMBC's test forest.

So these are just a few ideas but it'd be neat to have a script to quickly dump 1/3 of your images if they're blurry -- for example: 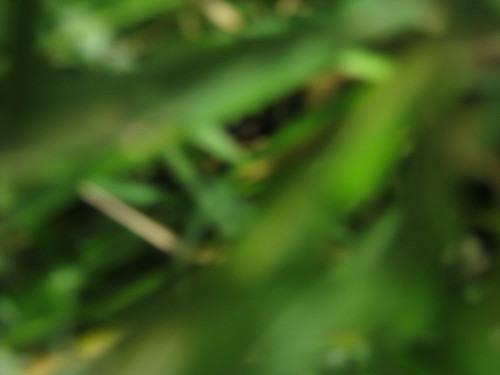 I never followed up with another post about this, but the tool was later refined quite a bit and a javascript 'drag and drop' interface made this very easy and effective. To use it, visit:

Here are some screenshots of the process: I have found this to be quite true! It's a neat phenomena. I dont think it can be used as a golden rule though. I can recall images that have one dominant feature like water, cement, or a white roof that while sharp can fall back in order by size. But its mostly true and is very useful if you want to just take a glance at a large set or if you are waiting for a set to transfer and you want to see the best imagery.

cfastie commented over 10 years ago

I really like the idea of a script that can rank each image for motion blur or focus blur. Figuring out which of your photos are blurry before you include them in a map (MapKnitter), stitched image (ICE), or structure from motion (Hypr3D) requires examining each one closely. A script could substantially improve this type of workflow and the quality of the final product. Ideally, the script could distinguish between motion blur and poor focus.

Maybe Ned knows if ImageJ can do this.

So I'd like to try this technique to select a subset of images to make a hypr3d model with -- since it only allows a few hundred images to be uploaded. I'm going to futz with the ruby script to see if I can automate the whole process, but first I'd like to do some tests to see if it actually works.

My plan is to test 2 scenarios:

How does that sound as a test? I can go to the mailing list for help in the manual sorting.

nice plan http://archive.publiclaboratory.org/maryland/2012-06-13-maryland-baltimore-umbc-kite/raw/vis/?C=S;O=D looking at the set and it seems pretty typical in terms of observing this size to crispness association

Update - I moved this tool to: https://mapknitter.org/sorter/

509 notes
created by warren over 10 years ago

378 notes
created by warren over 10 years ago

3 notes
created by zengirl2 over 5 years ago