Here is a history of public lab spectrometer research ideas up to the present. There is really n...

Here is a history of public lab spectrometer research ideas up to the present. There is really no analysis here, just a catalog.

Warren found some open source software for normalizing the intensity of spectra. Its called VSpec.

the beginnings of UV Fluorescence research are Warren's, and Alex McCarthy picked up on warren's research and provided a number of peer-reviewed papers on the subject of UV Spectroscopy.

What is Crude Oil, Turner Designs

In the end of 2013 warren succeeded in demonstrating some fluorescence of crude oil using a 405nm laser, and we put together a kit.

Dusjagr has posted about Raman spectroscopy on Public Lab and in more extensivelly at Hackteria. Dusjagr points out several peer-reviewed papers and resources.

calibration with a fluorescent bulb's mercury lines is fine for linear calibration of spectra as shown by stoft, but intensity calibration requires further research.

An extensive and ongoing discussion about intensity calibration was started by tomh in 2012. straylight suggested this paper on calibration with tungsten bulbs.

Jeff Warren kicked off the spectrometry project as a means to do oil identification, and the beginnings of our contemporary UV fluorescence kit can be seen in his late 2010-early 2011 notes along with research to determine if hydrocarbon identification would be possible with low cost CMOS, or CCD -based hacked devices.

Alex McCarthy's early 2011 research was instrumental to our contemporary spectrometer designs, and the rudiments of the fold-up spectrometer can be seen in their designs.. 2. An interesting direction explored by Alex was using a DVD as a reflective grating instead of a transmission grating. to quote: "Aside from not filtering UV light, the reflective grating spectrometer seemed to have a few other advantages: Because the light source was not in the line of sight of the camera, there was little or no glare in the spectrum."

Alex helped produce the our first guide to building a spectrometer.

After originating the spectrometry project and a year after starting to play with CD spectrometers warren posted a tutorial that really kicked off community research.Warren's awesome VHS box spectrometer, which he based on a series of cool educational workshops, such as this solar physics lab from NOAA and Simon Quellen Field's Scitoys spectrometer build. There are many tutorials on CD/DVD spectrometers out there, these are just two of the better examples.

Kosamari's spectrometer in a box uses a pvc 't' connector to block light getting in with the cables entering the box. 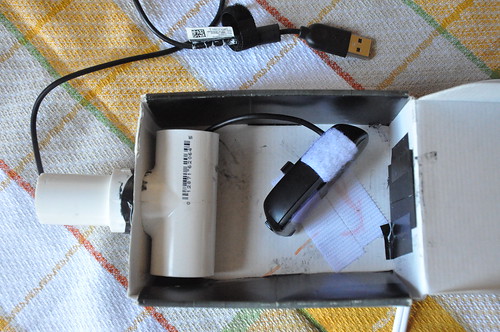 In order to make the spectrometer play nicely with add-ons and attachments, warren settled on a type LB conduit box as a better housing. This model depended on the easy to mount and rectangular Syba camera. When that camera went out of production in 2013, mathew modified the design to use a "gumstick" camera, the standard size of usb webcam found in laptops, right above the screen. This required the introduction of a 45 degree wooden block, and is a desktop spectrometer 2.5.

cfastie's design for Ebert, a spectral attachment to a point & shoot, with some expanded dimensions for improved resolution: cfastie also had a great series of mods for mounting a fold-up spectrometer to an iphone.

Homechemist has an interest in fluorescence and raman spectroscopy and created a reflectance spectrometer similar to Alex McCarthy's, only enclosed in a box. homechemist used two built-in lasers for calibration and fluorescence testing: Suiris built a spectrometer from a wooden box and put the camera on a magnetic mount so that it could be moved around from outside of the box: This spectrometer was very similar to stoft's all-magnet spectrometer. Stoft also suggests that the best means of setting focus is to bottom out a lens and then move it a set number of turns. For most of the spectrometer's history, we've used hand or laser cut paper as the slit. Some people have followed the NOAA instructions to create razor blade slits. Stoft saw the slit as a means to achieve some level of intensity calibration and to use high dynamic range (HDR) techniques to get more precise measurements. He began printing his own slits on acetate using a laser printer, as an alternative to lens filters that attenuate light. There are a lot of advantages to hdr, as stoft has pointed out. His printed slits didn't return very good results, though. Still, it was an interesting concept, and warren mentioned it to mathew who went and printed slits using photoprinting, whereby silver nitrate is deposited on acetate. This technique was integrated into the smartphone spectrometer for its clarity. That slit is .09mm in thickness, a thickness which is debated for the amount of light it passes. beginnings of a third generation

RTegelbeckers wanted a box that was flatter, and easier to put together (after he 3d printed it). Holding samples in the right place is a big demand for a new spectrometer, Dusjagr to have a cuvette holder. .
Mathew made a pattern for cutting the spectrometer box to accomplish a similar task.

Warren has also thought about a dropper holder for testing coffee. And a fold up spectrometer that is of a similar shape for cuvettes. This idea of using droplets instead of cuvettes is a very contemporary idea, similar to a "nanodrop" commercial spectrometer. Gaudi made this DIY version. There are a variety of out-of-patent methods of using droplets that mathew put in gaudi's comments. Things I found, not complete ideas.

Smoothing out spectra was proposed by philippg and implemented by warren. Philippg is attempting to measure phytoplankton and also needs intensity calibration

632 notes
created by mathew over 7 years ago

0 notes
created by liz over 5 years ago